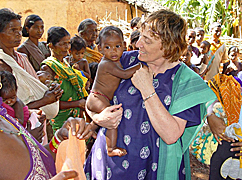 I went with a team to India where we travelled in the states of Orissa and Andhra Pradesh.
One day we were with some health workers visiting several tribal villages in Orissa.
In one village I was given a tiny baby to nurse.  She was so small and weak I thought she was only a few days old.
I was shattered when I discovered she was nine weeks old, the same age as my granddaughter, but half her size and weight.
The baby had a mouth full of thrush, so much that it looked like she had teeth; she was also very jaundiced. She had no muscle condition and no strength.

Apparently this was very common as the mothers are in such poor health and malnourished that they are therefore lacking enough milk to sustain life. The average birth weight of a baby born in a hospital in this area is 2kg. 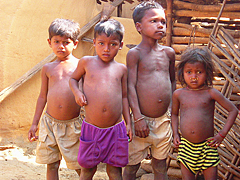 I asked the local doctor who was showing us around the area whether he could give the baby some drops to clear up the thrush. His response was that the mother doesn’t wash, so the baby would just get reinfected. I asked why the health workers couldn’t teach her to wash, his response was that there was no water for her to wash with.
I then pointed to a bore well about 30 metres away and said ‘but there’s a well just over there.’

The doctor told me that it was on “high caste” ground and as most of the people in the village were “lower caste”, they could not walk on that ground, let alone touch or use the well. The only water they could use was run off from the bore well or they could collect water from a nearby stagnant pond. I wondered why there wasn’t a lower caste well. I was told that the government would only sink one bore well in a village and that it would cost more than Rs 50,000 (AUD$1800) to sink another well. As they work as day labourers, the village would never be able to afford one themselves.

Unfortunately this is the story in thousands of villages in the mountainous hill country of Orissa and in many other states of India and other countries.

Undeterred I asked if I went home and raised enough for a bore well would he help me. His response was “where do you start? 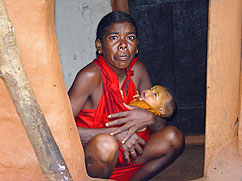 I returned to Australia with a burning passion to help. I wanted to raise the money needed to sink a bore well and provide clean, fresh water for the villagers.

After a lot of talking, planning, research and prayer, 12 months later (May 2005), Jacob’s Well India began.

Since then, we have partnered with many local Indian people who share the same vision allowing Jacob’s Well to grow and develop.
In over 15 years more than 100 bores have been sunk in remote villages providing clean, clear water to all. Through this work, we have been able to train families in raising health and hygiene standards in these villages; hundreds of children and adults have been taught literacy and tuition and several hundred children have joined our hostel and later our school to study, to go to college and complete degrees in Arts, Science, Commerce and Fine Arts.